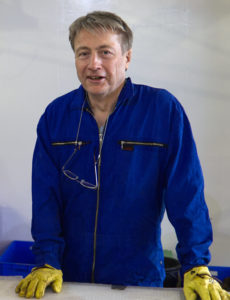 The volcanic flux at the Hawaiian hotspot generally increased over the last 30-80 Ma, with second-order variations over 10~15 Ma. This significant increase remains unexplained by classic plume theory, which predicts that a plume-head stage with massive volcanic activity is followed by a plume-tail stage with ever-decreasing activity. In particular, 25-30 Ma ago there was a sharp increase in the Hawaiian volcanic flux by a factor of ~4 that appears to be associated with an increase in Pacific plate motion from ~60 km/Ma to ~100 km/Ma. At about the same time there was a surge across the South Pacific of young low-volume hotspot tracks. It is unclear from our understanding of the poorly sampled Hawaiian track if these volcanic flux variations are related to the speedup of the Pacific plate or pulsations of the Hawaiian plume. To explain the coupled observations of faster plate speed and increased volcanic flux we aim to explore three young, relatively low-volume Pacific hotspot tracks. High–precision geochronological data for multiple hotspot tracks is the only way of extracting fundamental new information from the intraplate record about the poorly-sampled young end of the Hawaiian hotspot track. We propose to determine high-precision ages for samples from three hotspot tracks in the southeast Pacific. We will use new age and geochemical data to (1) pinpoint the timing of Pacific plate-speed increases and variations in hotspot volcanic flux, and (2) understand the underlying mechanisms controlling volcanic flux variations at Pacific hotspots.

Southwest Atlantic: A new type of extreme hotspot track, a propagating shear zone, or both

The South Atlantic Ocean hosts one of the rare examples of a seafloor plume track connected to continental flood basalts (CFB). While the Walvis Ridge on the African side of this plume-CFB system is well studied much less is known about the Rio Grande Rise (RGR) on the South American side and its relation with continental rifting and the opening of the South Atlantic. The RGR is widely considered to have formed together with WR while the Tristan-Gough hotspot-plume was located close to the Mid-Atlantic spreading ridge (MAR). However, widespread long-lived volcanism and mantle tomography suggest that another hotspot produced a different kind of volcanic track connecting the RGR to Jurassic flood basalts in Brazil.

We are testing competing models for the origin of intraplate magmatism and flood basalts by using high-precision geochronology and geochemistry to map the spatial, temporal, and geochemical evolution of this unknown RGR hotspot track. We will use the new data to (1) establish that the RGR is connected to Jurassic flood basalts in southeast Brazil via a hotspot track, a propagating shear zone, or both, (2) determine if and when the temporal and spatial development of the RGR and WR is synchronous, independent or intertwined, (3) use this information to test between different plume and non-plume models.