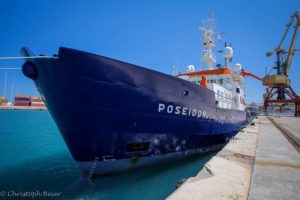 The volcanoes of the western Aegean island arc erupt mostly effusive lavas in contrast to the more explosive eruptions in the eastern part. The trip to the westernmost submarine volcano Paphsanias in the Aegean Sea is intended to map the submarine features surrounding the region. The volcano will be investigated and sampled in detail with the ROV (diving robot) PHOCA. The ROV dives will allow stratigraphic sampling of lavas and volcanoclastic material as appropriate, providing insights into magma genesis, ascent, and eruptive processes of the western volcanoes. Since the volcano last erupted about 2000 years ago, hydrothermal activity may also occur, which will of course be investigated and sampled. 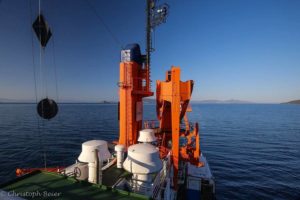 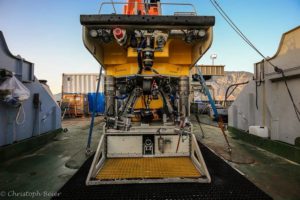 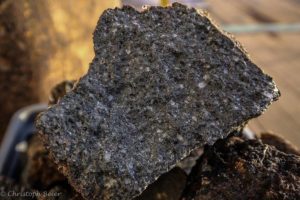 The Greek island of Santorini, which today is known mainly as a vacation paradise and photo motif, owes its current shape to the violent eruption of a volcano more than 3500 years ago. Similar to Santorini, other islands in the Aegean Sea were also formed by volcanism. The scientists from the Chair of Endogene Geodynamics at FAU want to study the volcanism of the western Aegean in more detail and have just returned from an expedition with the research vessel “Poseidon”. Keep reading ….

After some repairs on the diving robot (ROV) PHOCA were carried out in the port of Heraklion on Crete, the research vessel Poseidon set sail at 13:00 on 25.4.2017. In fine weather and calm seas, it headed north for about 20 hours to the working area west of the Methana peninsula in the Saronic Gulf.

We arrived at the work area at 8:00 am on April 16 and began a detailed bathymetric mapping of the submarine Paphsanias volcanic field in preparation for diving operations. The new map showed six smaller volcanic structures with elevations up to 200 m above the seafloor instead of the one larger crater previously assumed. On the morning of April 27, we began investigating the SE flank and summit of Volcano 1 with the PHOCA ROV. This revealed lava flows, some massive, and some large debris flows of lava alternating with areas of heavy sediment cover, indicating older volcanic activity. All areas of the volcano could be sampled and a total of 21 fresh rock samples of andesitic to dacitic composition were recovered. Another dive on the same day was made on the southern flank of the volcano and yielded another 11 rock samples. At 5:30 p.m., after a very successful day, the diving operations were completed and during the night areas of the Epidavros Basin were mapped to provide clues to the tectonic evolution of this extensional structure and the location of the volcanoes. 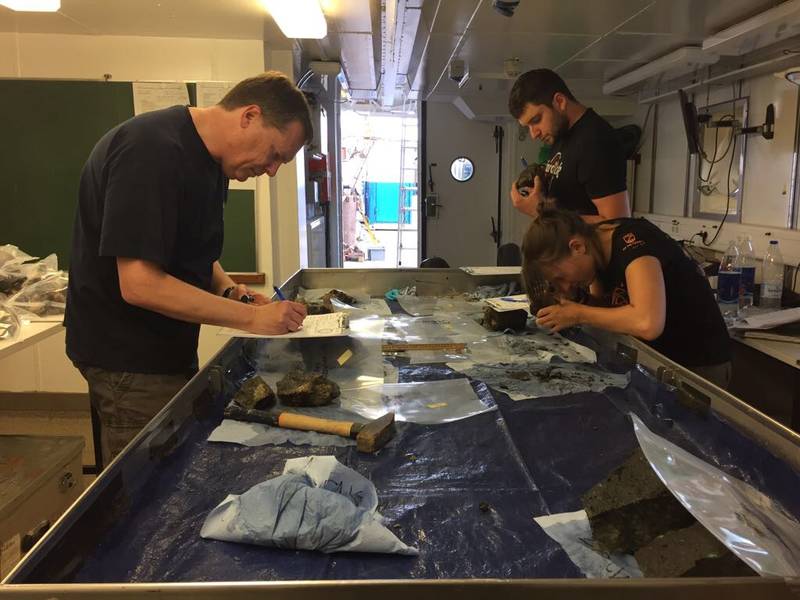 The next morning, the diving robot PHOCA was deployed on the southern flank of volcano 2 and here, too, lava flows appeared, some of them quite young, but also sediment-covered. During this dive 15 samples were collected, apparently ranging from basaltic to andesitic composition. The basaltic lavas occur as relatively young lava flows on sediments and contain olivine. Although the volcanic structures are small, they exhibit complex magmatic evolution and apparently some of the magmas are quite different from those on the Methana Peninsula, where basaltic lavas do not occur. A subsequent dive on the northern flank of volcano 2 yielded an additional 6 lava samples of presumably andesitic composition, so volcano 2 was also very well sampled. During the following night, the Epidavros Basin was further mapped and on the morning of April 29, the Poseidon steamed to the small port of Pachi on the northern edge of the Saronic Gulf to receive spare parts for the diving robot. In the afternoon, a dive was made on the northern flank of Volcano 3, which appears to be the oldest structure to date. Thick sediments cover the lower part of this lava flow and the rock outcrops that appear are covered with carbonate crusts of red algae and serpels. Therefore, only four lava samples could be taken, as well as some samples of the carbonate crusts. This was followed by continued mapping in the Epidavros Basin and on April 30 dives on volcanoes 4 and 5 and again on the SW flank of volcano 3. These structures are all relatively old compared to volcanoes 1 and 2 and we were only able to recover three lava samples as outcrops are covered by thick carbonate crusts.

Overall, the first week of the short trip was very successful and everyone on board is well and enjoying the beautiful and calm weather, which makes the work much easier.