The work program of the FS MARIA S. MERIAN cruise MSM86 to Vesteris Seamount was essentially focused on understanding the magmatic and tectonic processes that played a role in the formation of this large oceanic intraplate volcano. Other basement outcrops in the region were also to be sampled. Our research involved (1) investigating melt formation dynamics and mantle source composition and their implications for geodynamic evolution in the northern North Atlantic, (2) reconstructing volcanic structure and flank collapse of Vesteris Seamount, (3) recording the diversity of sponges and their microbiomes, and (4) studying fungi and bacteria that colonize cavities in volcanic rocks and the relationships between biological activity and rock alteration.

The cruise work areas are divided into (1) Vesteris Seamount, (2) Logi Ridge and Southern Seamount, (3) the northeastern area with unexplored rift mountains, and (4) Luise Boyd Seamount on the northern flank of Poppy Ridge. The bathymetry of all three work areas was mapped using multibeam echosounders; biological and geological samples were recovered using the SQUID-MARUM submersible robot (at Vesteris Seamount) and TV-grab (in all four work areas). During the MSM86 cruise it was shown that the geological structures of the Vesteris seamount are mainly composed of lavas and volcaniclastic lithologies. Outcrops of volcanic basement are largely covered by diamictic clays with dropstones in water depths >1000 m. In places, dark volcanic ashes and sands are intercalated. In water depths <300 m, the bedrock is covered by biogenic mats several tens of centimeters thick, consisting mainly of bryozoans and sponge needles. Rock samples from Vesteris Seamount are predominantly vesicular alkali basalts and porphyritic basanites with olivine and clinopyroxene. Volcaniclastics are mainly hyaloclastites, which seem to predominate in the summit area of the volcano.

The topography of the southern seamount shows steep flanks ranging from about 2000 m to a plateau at 400 m water depth. The plateau shows distinct scrape furrows caused by icebergs that have run aground. The volcanic rock samples are basaltic and probably alkaline. A majority of the rock samples are rounded and metamorphic in origin and are interpreted as dropstones. The topography of Logi Ridge is similar, with its summit plateau at about 500 m water depth. The slopes are somewhat less steep than at Southern Seamount. In water depths >600 m, cone-shaped structures of presumably volcanic origin can be discerned. Sampling of the cones and flanks revealed only diamictic clays and dropstones.

In the northeastern working area two structures were surveyed bathymetrically and sampled with the TV grab. Both structures are areas of several km2 with sea depths up to > 1000 m above the surrounding deep-sea plain. Sampling yielded very strongly Mn-oxide encrusted mantle peridotites from the southeastern of the two rift mountains and altered olivingabbro from the other locality. Thus, both structures could be identified as oceanic core complexes exhumed from the very slowly spreading Poppy Ridge about 40 million years ago.

Of 700 samples, 163 are rocks, including 122 from Vesteris Seamount alone; these include over 400 biological samples. The number and quality of the samples are first class and provide good conditions for a wide range of post-excursion research. 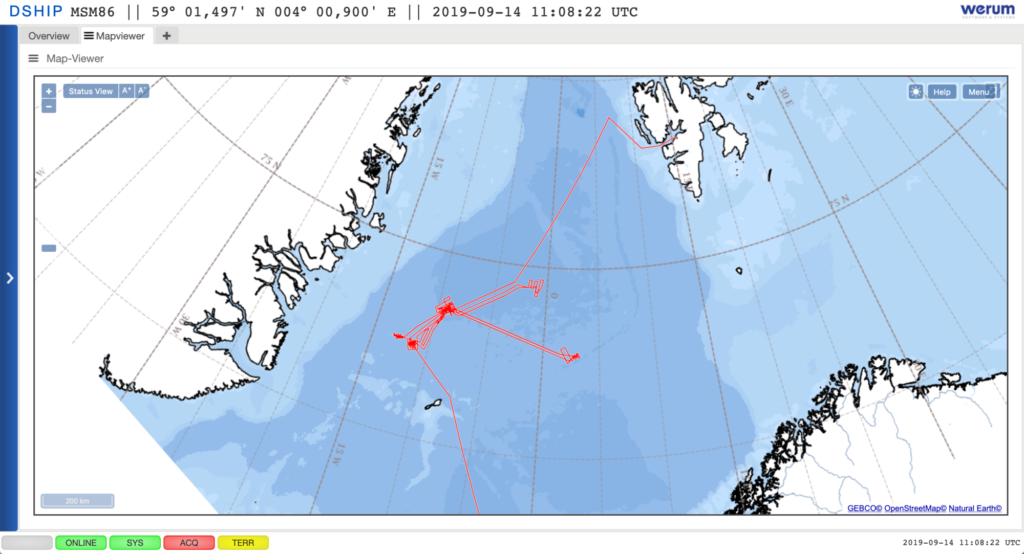