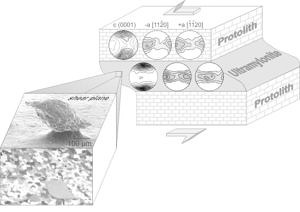 Strain localization in the earth crust play a major role during plate tectonics. Shear zones can accommodate very high strains (>100 km) and are therefore important for the structural development of the earth’s crust.

Dependent on lithospheric temperature/pressure conditions and strain rates, the deformation in the shear zone occurs through brittle fracturing (cataclasis) or crystal plastic processes (i.e. dynamic recrystallization). Particularly the application of automated grain orientation mapping via electron backscatter diffraction (EBSD) in the scanning electron microscope allows us to analyze microstructures with micro- to nanometer resolution in order to gain important information about deformation mechanisms. In further investigations, particularly to resolve dislocation in crystal lattice, samples are analysed by transmission electron microscopy. 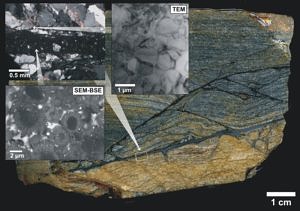 Destructive earthquakes nucleate predominantly at a depth of 10-15 km, making the monitoring of earthquake mechanics only indirectly possible through interpretation of seismic waves. In contrast, microstructures of so-called tectonic pseudotachylytes (fossil earthquake structures which nowadays can be found at the earth’s surface) provide important information on seismic faulting and earthquake mechanics. During an earthquake, a sudden release of the crustal stress causes an abrupt displacement along a localized fault plane. Frictional energy is transferred through heat, causing a partial melting of the rock along the fault plane followed by rapid solidification. Generated microstructures are very fine-grained (micrometer size) and therefore can only be analysed through electron microscopy.

We were able to show the first time that during the very initial stage of seismic fault slip, the quartz from the host rock next to the fault plane was dramatically reduced in grain size (down to 1-2 µm) by crystal plastic deformation processes. Thermal models indicate that the process of recrystallization occurred in a time lapse of a few tens of seconds and was made possible by the ultra high temperature transient along and around the slip plane through production of superheated (T > 1200° C) frictional melts. 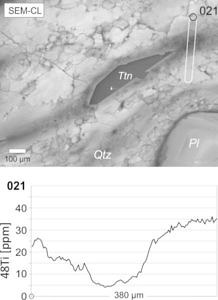 Not only crystal lattice is affected during deformation; an accompanied change in trace element concentration can also take place. A current research project analyses the dependence of the titanium (Ti) trace element concentration in quartz lattice with respect to the deformation temperature. The aim of the project is to conduct a critical evaluation about the applicability of the so-called Ti-in-qtz geothermometer in constraining deformation temperatures in quarzitic rocks.

In addition to EBSD analysis, the microstructure was examined by cathodoluminescence in the scanning electron microscope. Afterwards the Ti trace element concentration (ppm range) was analysed by ionprobe (SIMS). We were able to show that the intensity of the cathodoluminescence signal directly correlates to the Ti concentration in the quartz. However, whether a new related temperature resetting of the Ti-in-qtz system is established depends mainly on the deformation process (e.g. dynamic recrystallization and/or dissolution precipitation), the strain rate and the amount of strain.

Naturally deformed rocks often preserve microstructures which are the result of complex deformation histories. In order to understand how microfabrics develop with time, we carried out static (no deformation) in-situ heating experiments in the scanning electron microscope (SEM). Experimental pre-deformed rocksalt (NaCl) was gradually heated up in the SEM and analysed by EBSD. We were able to show that the microstructure changed continuously. Contrary to general textbook knowledge, crystallographic orientation maps (based on EBSD data) revealed that behind slowly migrating grain boundaries new subgrain boundaries form, while pre-existing subgrain boundaries are sometimes inherited.