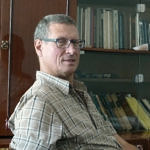 Scientific Career:
In 1978 I started undergraduate studies at the Mineralogical Institute of the Technical University of Braunschweig (Germany). After passing the candidate’s examination in January 1982 I was selected for a Deutscher Akademischen Auslandsdienst (DAAD)-scholarship to study one year at the Geology-Department of the University of the Witwatersrand (Johannesburg/South Africa). The renewal of this scholarship made it possible to do my MSc- thesis on the geochemistry and petrology of the metamorphosed massive sulphide deposit, Matchless Mine (Namibia) under the supervision of Prof. Dr. M. Okrusch (Universität Würzburg) and Prof. Dr. K.J. Maiden (University of Witwatersrand).
In June 1984, I joined the Department of Geology of the Rand Afrikaans University (Johannesburg, South Africa) in order to undertake a PhD project. My PhD “A mineralogical and mineralchemical investigation of Archaean granites bordering the Witwatersrand Basin” (Internal Examiner: Prof. Dr. J.M. Barton (Jr); external Examiner: Prof. Dr. B.J. Skinner (Yale University); Prof. Dr. J.P.R. de Villiers (then Arizona State University) was completed in 1987.
From November 1987 to August 1989 I have been a Research Fellow at the Institute of Mineralogy of the Universität Würzburg (Germany). Since September 1989 I was a member of the Universität Bremen, first as a Junior lecturer and then from 1993 as a Senior Lecturer. In March 1999 I was appointed as Full Professor for for Ore Petrology and Geochemistry at the University of Würzburg. In April 2007 I changed to the University of Erlangen- Nürnberg where I was appointed as Full Professor for Geochemistry and Economic Geology.

Fellowship:
Fellow of the Geological Society of South Africa

Research interests:
My present research interest is mainly concerned with the geology, geochemistry, fluid chemistry and exploration of ore deposits as well as fluid/rock interaction in metamorphic rocks.